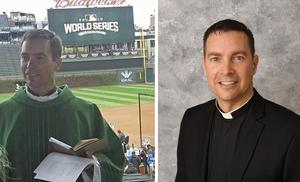 Fr. Burke was born and raised in Joliet. He attended Laraway Grade School and Providence Catholic High School. He studied mathematics and played baseball at Mississippi State University, where he played in the College World Series in 1990. He worked as an actuary for Kemper Insurance and as the ticket manager for the Kane County Cougars before entering Mundelein Seminary in 1997.

He has served as the Catholic chaplain for the Chicago Cubs since 2013, including being a part of the momentous 2016 World Series Championship. He also started the Catholic Sports Camps in the area because of his passion to combine faith and sports.

He has served as parish administrator at St. Francis Xavier in Joliet and St. Dennis in Lockport.

“I look forward very much to this time at Notre Dame. I can’t wait to meet the parishioners! I am here to serve you and your families.” – Fr. Burke Masters